According to medical experts fibroid wouldn’t cause problem during pregnancy. But main symptoms of its existence are fever, pain, nausea, vomiting and increase in white blood cells.

Fibroids in uterus are noncancerous growths which are painless and majority of women are unaware of its existence as there is no pain associated with it. Only in those conditions the victim feels its existence when it becomes too big or when the patient goes for uterus ultrasound for checking its initial pregnancy status. 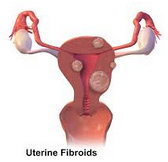 Medical experts are not clear about the real cause of this uterus condition but hormonal factor and family history vital role in its development according to some experts.  During pregnancy fibroid can’t be removed as there uterus is more prone to bleeding than normal condition. It is best to live with uterus during pregnancy and think about its removal when the baby is born.

There are possible complications associated with this uterus condition despite of the fact those problems are rare.

Majority of women of feel no complication during pregnancy and deliver because of fibroids existence but in some cases it can.

According to medical experts when fibroids become large than 2 inches which probably happens during pregnancy because of growth hormones responsible for this condition; progesterone and estrogen. In case this growth during pregnancy is rapid the central portion of the fibroid can degenerate; in this situation the mom feels fibroid associated pain.

During the first three months the main problems are;

As far as the bleeding and pain is concerned the fibroid sufferers are categorized in three;

Miscarriage chances are more in women with fibroids; chances of miscarriage are 50% more when compared to women without fibroids. If you have more than one fibroid then it will increase further.

Pain is the most common problem especially if your fibroid is large in size.

In some situation the fibroid twists resulting in pain and cramping. In some cases there is blood blockage to fibroids causing it red and dies. It is called red degeneration. This red degeneration can cause severe pain in stomach. It can lead to early labor and in some cases it can cause miscarriage. Physician normally recommends acetaminophen (Tylenol). NSAIDs like ibuprofen must be avoided in early in your pregnancy and in your third trimester as it can lead to miscarriage.

Women with fibroid have greater chances of placental abruption than women without fibroid.

Your fibroid can cause preterm delivery means your baby born before 37 weeks of pregnancy.

Women with fibroids having more chances of cesarean section than women without fibroid!

There is substantial reduction in fibroid size.